because there is a Right Angle on everything

A Time to Judge: Nazi Germany & the Peril of Moral Weakness 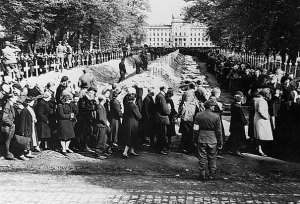 Local Germans rounded up by Allied troops and made to tour Hitler’s death camps. Citizens file past a long line of corpses at a camp in Wobbelin, Germany. 1945.

In April 1945, as British and American soldiers liberated Nazi concentration camps, civilized people around the world gasped in horror at the images coming out of Germany. Newsreel footage showed catatonic, living skeletons, many of them all-but-dead in various stages of disease, dehydration, and starvation. Bergen-Belsen alone, liberated on April 15, held 60,000 living men, women, and children, with another 20,000 lying dead in the open, unburied.

By the end of April, Adolph Hitler had added his own corpse to the death toll, and the war in Europe was over. Good people everywhere were grateful and relieved, but in the aftermath, deeply troubling yet inescapable questions arose. How did this happen?—in Germany, no less, the land of Martin Luther, the Catholic monk who had given birth to the Protestant Reformation?

Nearly a century later, it’s easy to view the whole of Nazi Germany telescopically through the lens of Schindler’s List or the U.S. Holocaust Museum: The Nazis were bad; it must not happen again; now let’s move on. But human history is not so simple. The same Adolph Hitler, who in the 1940s was recognized as a murderous despot, rose to power in the 1930s with widespread approval. The more apropos question might be, How did that happen?

How Not to Tame Your Dragon 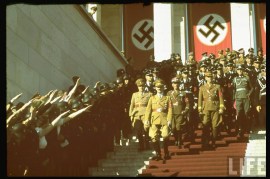 Two recent books shed light on that enigma. One, Erik Larson’s In the Garden of Beasts, vividly recaptures pre-World War II Berlin as it chronicles the tenure of William Dodd, U.S. ambassador to Germany from 1933 to 1937. Larson puts particular focus on 1933–1934, when “all the themes of the greater epic of war and murder soon to come were laid down.” Dodd gradually began to see the dark threat posed by Adolph Hitler and the regime he was organizing around him, but his 24-year-old daughter Martha, captivated by the Nazis’ pomp, power, and handsome young men in uniform, not only failed to see it, but ignored it when it played out right in front of her.

The story that unfolded through and around these two Americans, who rubbed elbows with Berlin’s elite, reads like a novel of political intrigue. But the eerie awareness that it recounts factual history, involving men whose names have become synonymous with evil personified, makes it riveting reading.

It also makes it a clarion call to learn from history. To that end, Larson reveals some common traits of otherwise well-meaning people that enabled the dragons among them to grow virtually unchecked:

Moral obtuseness. It’s one thing to extend grace and give others the benefit of the doubt. But it’s quite another to overlook wrong or make excuses for it. Soon after the Dodd family arrived in Berlin in July 1933, Martha received a visit from Sigrid Schultz, a Berlin correspondent for the Chicago Tribune. Schultz spoke to Martha about the rapid transformation of Berlin since Hitler  had come to power—the violence, the beatings, and the imprisonment of Jews and others unsympathetic to Nazi objectives, but Martha didn’t believe her. Across Germany, observant people were aware of, or heard rumors about, Nazi abuses like these, but they either overlooked them (It was an isolated incident) or, like Martha, dismissed them out of hand (That’s impossible!).

Antipathy to strain. In August 1933, Martha witnessed a disturbing midnight spectacle. Amid torches and banners, SA storm troopers were “half-supporting, half-dragging” a woman whose head had been shaved bald. Around her neck hung a placard reading, “I HAVE OFFERED MYSELF TO A JEW.” Martha learned that the woman’s sole offense was becoming engaged to a Jewish man.

Even so, Martha—the daughter of the American ambassador, whose eyewitness account could have simultaneously bypassed Nazi censors and lent international credibility to rumored Nazi abuses—pleaded that the story not be reported. “It was not really important, would create a bad impression, did not reveal actually what was going on in Germany, overshadowed the constructive work they were doing,” she argued.

This was a heady time in Germany. The Third Reich promised hope for a strong, restored Germany. Perhaps the Nazis waxed a bit overzealous, the more astute might concede. But the general citizenry, being peaceable and law-abiding themselves, believed that law and order would prevail. Whether due to moral cowardice or naïve optimism, the effect was a moral impotence by which “Don’t make waves” usually won out over making an incident.

Leader worship. The Great War (later called World War I) had been catastrophic for Germany. Since its end, the German people had endured chastisement internationally and political and economic chaos internally. Amid this seemingly interminable maelstrom, many saw in Adolph Hitler a magnetic and commanding leader they could believe in, and his personage approached godlike status in the public mind.

Accompanying this pseudo, if not blatant, idolatry was a nationalistic fervor that clouded many Germans’ otherwise good judgment and began to supplant reason and healthy skepticism. Being German was a crucial part of a German’s identity. And, as the Nazis cast it, to be German increasingly meant to be Nazi. It was neither popular nor a simple matter to retain one identity while rejecting the other.

And so the Nazi train rolled on, and the German people were carried along with it.

Gleichschaltung
It had been moving at head-spinning speed from day one. Hitler was appointed chancellor on January 30, 1933. The first concentration camp, KZ Dachau, opened on March 22. Jews were not taken there (yet), but hundreds, possibly thousands, of political opponents were sent there for “protective custody.” Discipline was swift and merciless. (“Any pity whatsoever for ‘enemies of the State’ was unworthy of an SS-man,” a guard later attested.) On March 23, the Enabling Act was passed, essentially placing all government power in Hitler’s hands. And on April 7, the “Aryan Paragraph,” the first of Germany’s far-reaching Aryan laws, went into effect.

In less than ten weeks, Adolph Hitler had consolidated power, opened prison camps, and begun dispossessing the Jews. Things were changing rapidly that summer, and the pressure of Gleichschaltung—“synchronization” or “coordination” with National Socialism—was mounting equally rapidly. Most Germans submitted willingly, a phenomenon that became known as Selbstgleichschaltung, or “self-coordination.”

The Courage to Counter Gleichschaltung

One remarkable exception was Dietrich Bonhoeffer, whose life Eric Metaxas has set forth exquisitely in Bonhoeffer: Pastor, Prophet, Martyr, Spy. By the time the Dodd family arrived in Berlin, Bonhoeffer had been trying to alert German pastors to the threat posed by Nazism for three months. Tragically, most of his colleagues considered his opposition too extreme, and by the fall of 1933, the overwhelming majority of them went along with the Nazis.

How was Dietrich Bonhoeffer, who at the young age of 27 stood apart from both the Nazis and the established church, able to see what most of his contemporaries missed? According to Metaxas’s account, Bonhoeffer possessed and exercised:

Moral clarity. The son of a devout mother, young Dietrich had been immersed in religious training from infancy. He understood that man was capable of great evil, and he therefore had the moral vision from the beginning to see Adolph Hitler for what he was: a would-be tyrant who set himself up as a god in defiance of the real God.

But there was more to his approach than a doctrinaire moralism. From his father, a medical doctor dedicated to empirical science, Dietrich had learned to think critically and to give primacy to reason over feelings, and he brought these intellectual disciplines to questions of faith and theology. “There was only one reality, and Christ was Lord of all of it or none.”

Moral courage. Since Christ was Lord of all of it, Bonhoeffer committed himself to determining and doing what was right before Christ, regardless of what people around him were doing and regardless of the cost to himself personally. A ruthless intellectual, he went to great lengths—consulting the Scriptures, trusted friends, and, through prayer, God himself—to determine the right course of action. “[O]ne cannot simply think about God in one’s own strength, one has to enquire of him,” he wrote. But once he determined the right course of action, he executed it with faithful resolve and entrusted everything else to God.

God worship. Bonhoeffer reserved his worship for God alone. Germany was steeped in liberal theology. Against this lax theological background, Bonhoeffer, a remarkably independent thinker from a young age, reverted to the traditional Lutheran belief in a transcendent God who actually existed and who was able and willing to reveal himself to anyone who earnestly sought him. Convinced of this, he sought to “self-coordinate” to God first and to man second, if at all.

This both simplified and complicated things for him. It simplified things because, having done his best to determine the right course of action, he was able to rest his case on the mercy of the God he knew to be trustworthy. It complicated things because it set him at odds with the Nazis and rendered him an oddity (or a fool) to Nazi sympathizers, who, in 1933, included most of his fellow Germans.

Learning from History
The political machinery for the complete Nazification of Germany was in place by the summer of 1933, but Hitler lacked the military power necessary to carry out his objectives. He therefore could have been stopped at that point if enough Germans had, like Bonhoeffer, refused to go along. Following German failure, he could have been stopped if European powers had checked his aggression. Even as late as 1936, England and France possessed overwhelming military power compared to Germany.

Across the Atlantic, a similar reticence followed. William Dodd warned repeatedly of the Nazi threat upon his return to America in 1938., but the U.S. State Department appointed a successor to Berlin who praised Hitler and the Nazis.

The cost of moral obtuseness and subsequent appeasement was staggering. Estimates of the death toll attributable to Adolph Hitler range from 20 to 40 million people.

Those were real people. With sweeping rhetoric, Hitler promised great things for them, but instead of peace and prosperity, he brought them death and destruction on a mind-numbing scale. Many of them, had they bothered to read Mein Kampf or to compare Hitler’s past actions to his words, would have foreseen their inevitable end. Tragically, very few did. Even more tragically, those few who did see it were generally ignored or dismissed as extremists.

But history has vindicated them and convicted their accusers. History has also provided a stark lesson for anyone willing to learn from it. Evil can only be stopped through moral strength. Two things are required: the moral vision to see through the façade of smooth words, and the courage to call evil what it is and to stand against it.

← Son of Hope: The Story of David Berkowitz
A Severe Mercy: Connecting with Your Conscience →

One Comment on “A Time to Judge: Nazi Germany & the Peril of Moral Weakness”